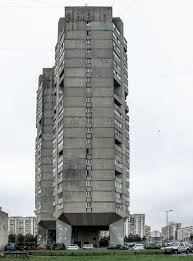 “The Workers Co-operative Housing Association”, (WCHA) Strapline – ‘Providing Homes for the Revolutionary’ – despite objections from the neighbours, convert Jim Patience’s former home into a set of bedsits ready for ten families who have settled in the UK illegally. Within a day of moving in, they have sublet the garage, the bathrooms, the toilets and the garden to more illegal immigrants who happen to be friends of Boris.

Too much fanfare, the WCHA offer Nicky and Boris brand new Revolutionary social housing flats. The BBC in its new role as a Public Relations announcer for the NRLP Government covers the ceremony to show how well the new Social Houses are built and how many happy families are now living in areas where the rents are controlled.

A week later the apartments allocated to Nicky and Boris and are daubed with graffiti, broken windows and puke running down the walls. Syringes and needles litter the floors while outside the bins are overflowing. Their ‘friends’ remove all the taps, the toilet, kitchen units and all the furnishings that came with the flats, funded by the taxpayer.

Nicky and Boris approach the WCHA to complain that burglars broke in. The police and WCHA investigate before spending tens of thousands of cash repairing the damage. IN the meantime Nicky and Boris are placed in a Bed and Breakfast. When the flats are finished they return to their new apartments.  When their friends visit, within days wreck the places.

does a follow up on Jim Patience and his wife who are struggling to find work and are almost destitute, but as they were once wealthy, their claim for the benefits is turned down.

Using some skilful camera and editorial work they show Nicky and Boris living happily as their raggedy friends come and go.

The BBC demonstrates what egalitarian social policies can achieve when placed into practice. They Place JC and his minister centre stage where people clap and all hail to the new coming.

JCN and the Trade Unions slap each other on the back while sipping champagne in Number 10 before discussing the next significant socialist policy.